555 TIMING IS EVERYTHING IN MUSICAL DESIGN

When Staffordshire University student Edward Holmes was offered a place at a Science and Engineering summer camp in the US, he was asked to design a project to take with him. He will be teaching electronics to local schoolchildren, so inspired by his love of circuitry and the digital sounds of the Stylophone, he came up with a product made entirely with components sourced from Rapid.

Using the skills gained from his Electronic Engineering degree course, he has designed a toy piano that uses a 555 timer chip and replicates the different notes made by a real piano. “The 555 timer is a really versatile chip and it seemed like a good starting point to introduce the children to ICs”, says Edward, who starts his placement in Pennsylvania in June. “When speaking with the program director from the camp, he told me that the children loved projects that made noise or flashed lights and so it got me looking for circuits and ideas that would not only be fun, but also relatively easy to understand the theory behind them.”

Edward's first inspiration was a circuit in Forrest M. Mims' influential book Volume I – Timer, Op Amp & Optoelectronic Circuits & Projects. Mims' circuit consisted of a 555 timer and various selectable capacitance values wired in parallel. However, to replicate the notes made by piano keys Edward thought that using resistor values would be a better solution than capacitors. “Initially I thought of just chaining lots of 1K resistors together and using a stylus to select the note I wanted, the further along in the chain, the higher the resistance and lower the frequency. Then it occurred to me ... surely I could reproduce the different frequencies of actual notes?”

Edward found the range of frequencies contained within a particular set of notes (in this case two octaves starting at Middle C), and calculated the appropriate resistor values to which these corresponded. “I worked out which values I needed and then worked out the actual output frequency, assuming 0% tolerance on the resistors. This allowed me to calculate the difference between the real frequency and the actual frequency. I was surprised to find out that the maximum deviation was only 1.32% with most notes having less than 1% deviation.”

Tuning up for an inventive career

The bread-boarding process then enabled Edward to test what actually happened when different resistors were selected, as if they were different keys on a piano. Wire was used to simulate an input or actuator. “Despite some of the notes being off frequency a little I was pleasantly surprised at the quality of the notes produced”, said Edward. “I did consider adding a variable resistor to allow tuning of every note, but I decided this wasn't really necessary and I wanted to keep the design nice and simple. I believe there is a certain elegance in a simplistic, but innovative design.” 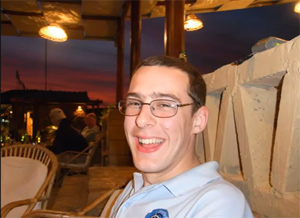 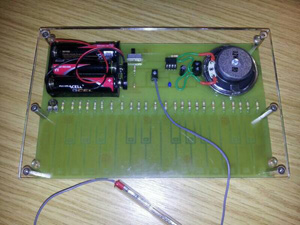 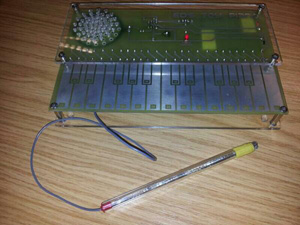 The next challenge was to design his PCB using the toner transfer method, which Edward had never tried before. “This was also the first time that I had used tin plating and I couldn't believe how easily the components soldered in place! I gave the board a quick functional test and was delighted to see that it worked first time.” After fixing the PCB between a two-piece Perspex case secured with hexagonal supports, and using an old biro case as a stylus housing, the piano was complete.

Edward has put together a professional user manual to accompany his invention. Please click here to view the manual and a complete parts list with Rapid order codes.

The piano is very much a work in progress, with the potential for additional features such as volume controls, individually tunable notes, pitch control and vibrato to be incorporated into the design. The experience of designing his own prototype has given Edward even more enthusiasm for his future career. “When I finish my degree I hope to work in the area of electronics as an engineer and move abroad.  I really enjoy designing circuits and seeing them all the way through to manufacture, so seeing one of my designs go into production and for sale would be a really rewarding experience.”

What sort of products do you buy from Rapid?“I buy all sorts of things including arts and crafts materials, tools, PCBs, chemicals and components. The reason I buy from Rapid is because I can't find the parts anywhere else cheaper. I'm always given great service and the fast delivery really is ‘Rapid'!”

“As there is such a huge range of components I find that a lot of specific ICs or components are simply not available anywhere else. When they are I certainly can't buy them individually like I can at Rapid."