Creating the right tone from Colchester to California

An American manufacturer of bespoke guitar effects equipment goes to great lengths to source his components from Rapid. Marc Ahlfs, the man behind Skreddy Pedals, has very specific requirements for his devices which help guitarists achieve certain tones, fuzz, delay and feedback effects. Based in Roseville, California, a city close to the Sierra Nevada foothills, he has been buying a specific range of low power NPN transistors from across the Atlantic for several years, and regards Rapid as one of the suppliers he could not do without.

'Rapid is kind of like my secret weapon', says Marc. 'They stock a lot of transistors that are generally regarded as obsolete, and are not widely distributed here in the States. A supplier in India makes them, but there's a four figure minimum order value!' Marc speaks to his Rapid account manager and the technical team in Colchester on a regular basis, and Rapid do their best to source and supply the components he orders regularly. These include the Bc 109c family of low noise, high gain transistors which are ideal for his proudly retro devices. Marc has been hand making effects pedals for many years, alongside working as a guitarist with a variety of West Coast bands. He is steeped in the great rock guitarists, and some of his favourite artists have inspired his pedals. David Gilmour's work on Pink Floyd's classic albums of the 1970s is a particular favourite.

Getting the Gilmour sound

'Gilmour is one of a handful of guitarists who have been a profound influence on my musical imagination. And it turns out his tones are some of the most difficult to emulate. They sound so simple at first, but to get there takes you through a long and complex path', Marc explains.

'Chasing his tone helped me learn a lot, in general, about how guitars and effects and amplifiers interact and how I could improve upon my own sounds and my work of creating new effects and improving on older designs.'

Marc's latest pedal, the Lunar Module, was developed specifically for guitarists to recreate the silicon fuzz tone Gilmour used on the classic 'Dark Side of the Moon' LP.

'Who isn't inspired by the soaring, delay-soaked solo to the song 'Time'?', Marc asks. 'That solo was evidently cut together at the mixing desk using several different takes, some being more articulate and clear and some more spitty and saturated. I intentionally voiced my Lunar Module to be able to "get" that same range of tones.'

'The Lunar Module is the one product of mine that uses the most Bc 109C transistors. It's roughly based on the Dallas Arbiter Fuzz Face (from the late 60's), but it's updated and redesigned for better compatibility with modern equipment. It features better performance and flexibility and uses three transistors instead of the original's two.' 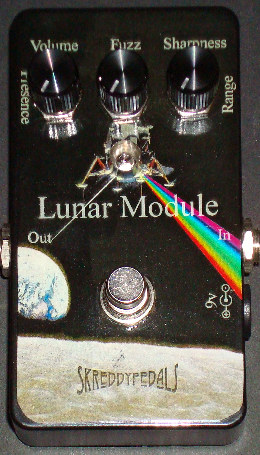 Expertly assembled, the devices are finished with imaginative, psychedelic designs and are always memorably named. Current offerings include the Screw Driver, Top Fuel, Pig Mine and Paradigm Shift. The pedals are extremely popular with professional guitarists. Among Marc's customers are Leo Abrahams (who has worked with Brian Eno, Roxy Music, Nick Cave and Jarvis Cocker) and Lyle Workman, a session and stage guitarist who has played with Sting, Norah Jones, Sheryl Crow, Shakira, They Might Be Giants and Frank Black of The Pixies. Marc will often make pedals at the request of his customers who want a specific tone.

Skreddy Pedals are critically acclaimed too. Premier Guitar magazine was fulsome in its praise for the Lunar Module Deluxe, citing the transistor itself as critical to its 'brilliant' performance, 'which gives the player even more control over this notoriously hairy circuit'.

Marc is certainly grateful for the service he receives from his UK supplier. 'Steve Perry at Rapid was kind enough to help me out when I was having some trouble getting the BC109 transistors I needed in the desired gain ranges. I'm very happy to deal with Rapid, and your shipping is top notch and very fast.'

Hopefully Rapid can play their part in the Skreddy success story for a considerable 'Time' to come.

Pink Floyd's Dark Side of the Moon, the album that has inspired so many of Marc's pedals 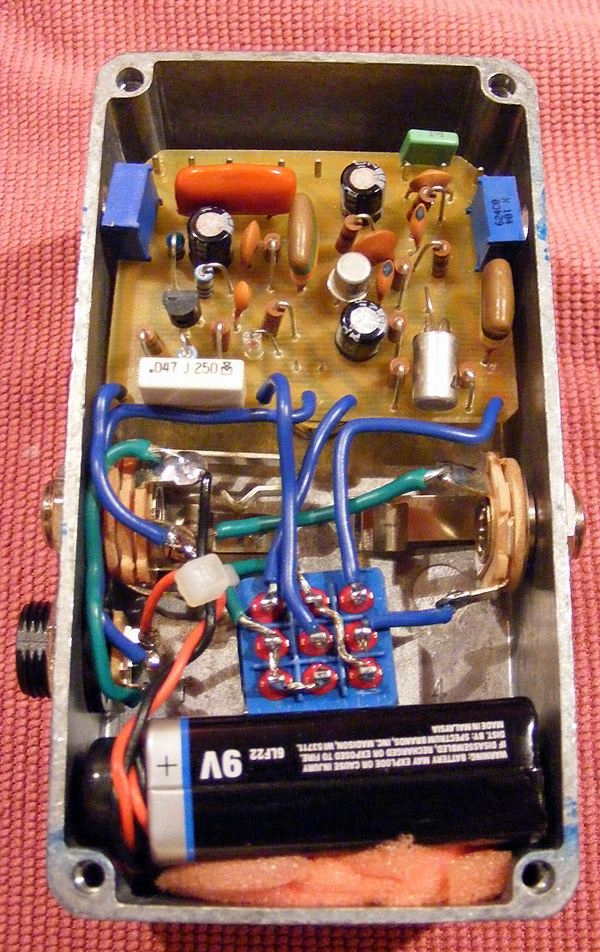 The circuitry of a Screwdriver pedal