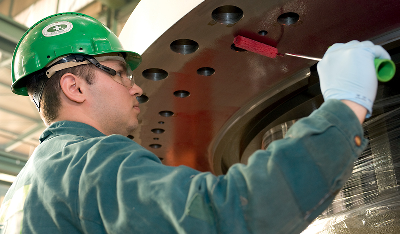 The tunnel boring machines (TBMs) made by the German company Herrenknecht are a wonder of modern engineering.

Towering over their workers, these monumental drills are more like giant mobile factories that not only excavate but process the waste earth and lay the tunnelling. Herrenknecht’s TBMs have several landmark projects to their name already, including the 57km Gotthard Base Tunnel in Switzerland, which when it opened in 2016 became the world’s longest and deepest railway traffic tunnel.

No fewer than eight TBMs dug the 21 km (13 miles) of new tunnelling for the London Crossrail project, the 118 km railway line linking Berkshire to Essex. Each of the Crossrail TBMs are 148m long and weigh over 1,000 tonnes (heavier than a dozen 747 jumbo jets).

But what has this got to do with Loctite?

A variety of Loctite adhesive products were used in the assembly of each TBM.

The anaerobic properties of adhesives make them particularly well suited to the vibrations and temperature fluctuation of deep level engineering. Loctite 243 threadlocking solution is used to lock bolts in the machine, which has to withstand enormous pressure as the cutting wheel eats its way through the subterranean soils. The 9m tall rotary cutting head’s power unit relies on a variable number of single engines. The upper flange ring, main bearing and the transmission case of the cutting head are all locked in place using the high strength sealant Loctite 586. This secures and upgrades by up to 2.5 times the torque capacity of the flanges on the main drive. Loctite 577 is used for thread sealing in the machine and Loctite 7070 as a cleaner.

Why do people love Loctite? Probably because of stories like this. Because the same type of threadlocking adhesive you might use around your workshop also secures the bolts of the gigantic boring machines that have dug the Crossrail tunnels deep beneath London. You can now harness this super strength adhesive from stock at Rapid, with Loctite lines available across their full range of engineered adhesives and sealants.