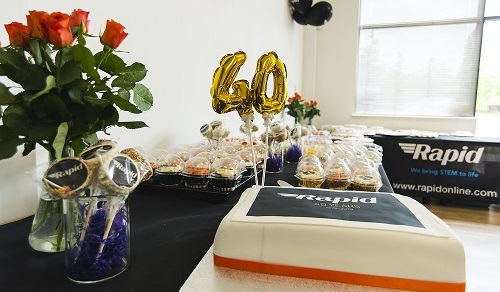 40 years since it was founded, Rapid celebrated with a party and networking event at its Colchester headquarters. The event attracted guests from the electronics industry, local business representatives and the company’s charity partners.

“We were delighted that so many of our suppliers, customers and partners were able to attend. It was a very enjoyable afternoon,” said Mr Bates. It was an opportunity to celebrate the achievements of the company and the contributions of its staff.

“Your 40th birthday is always a big moment, but when people get to that milestone they are normally starting to slow down”, said Mr Bates. “At Rapid however we are speeding up – becoming more responsive to our customers’ needs, investing in new technologies and adapting to and influencing market trends.

“For example, we were selling electronic project kits and chips that helped children learn about coding, prototyping and programming long before the Raspberry Pi was launched – which we have also greatly supported – and were the first UK distributor of the NAO and Pepper humanoid robots.”

As part of its celebrations the company compiled a list of its 40 Key Moments, with former employees and the original founder Chris Stevenson sharing their memories of days gone by. Its first premises in Essex were at the Hill Farm Industrial Estate in Boxted, which while an improvement on its original site in Kent was still sometimes at the mercy of the elements. Its warehouse was badly hit by the Great Storm of 1987, with staff asked to bring in hairdryers to dry out the stock! In 1989 came a move to its first purpose-built site at Heckworth Close, on the soon to be opened Colchester Business Park, and then in 2000 the company moved to its current premises.

Some of its staff have seen all of these moves, with four, Lynn Evans, Angie Martin, Denise Bird and Anna Barham, each having been with the company for well over 30 years. Lynn, in fact, was the company’s very first full-time employee, having started at Rapid in September 1983. “I’ve never thought about leaving”, says Lynn. “I’ve grown up with the company and there’s been so many people who’ve done the same – there has always been a family feel to Rapid. I’m very proud to be our longest serving employee!”

Rapid has long been a supporter of educational initiatives, especially those that encourage skills in engineering and technology – vitally important areas for UK industry, now and in the future. It co-founded the Toyota Technology Challenge in 2004, and since 2012 has helped to co-ordinate the VEX Robotics and VEX IQ robotics competitions, which give students aged 8-18 the opportunity to design and build robots and compete with them at regional, national and international level. In 2018 Rapid launched a new STEM initiative called Airgineers, which combines CAD and CAM technologies with drone engineering. 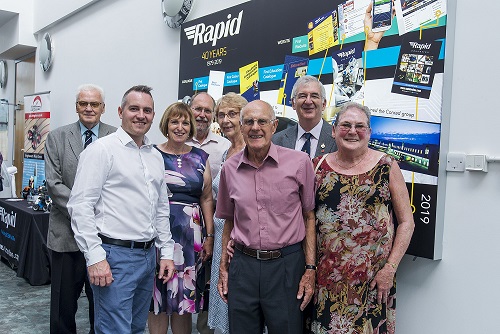 Giving something back to the local community has also been a key part of the Rapid story. Through various initiatives, such as allowing football fans to use its car park on Colchester United match days, and helping the Royal British Legion (members of whom are pictured right with Mr Bates) to sell poppies at supermarkets, Rapid has raised considerable sums for local charities.

“We have always been a forward-thinking, flexible company, proud of our past but with exciting plans for the future,” says Bates. “As a distributor of electric vehicle charging stations we are leading the way with building the infrastructure the UK will need for the switch to zero emission cars. With this in mind we are about to launch a brand new EV charging brand, offering a full service solution for EV charging installers”, says Bates.

There will be more events and initiatives to mark the anniversary throughout the rest of the year.

?????? Happy Birthday Rapid ?????? Such a lovely afternoon. Thank you for inviting CamdenBoss along and for the scrummy cup cakes :)

congradulations from all of us at Hammond!!