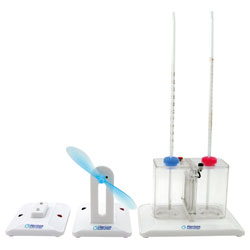 This thermal power science kit from Horizon has been designed so you can generate electricity using nothing more than a combination of hot and cold water and a special conversion cell. As the temperature evens out between the two containers of water, the power level reduces. LED and mini turbines demonstrate the variance in the electrical power being generated and there are two thermometers to keep track of the temperature levels.

The kit can be used to demonstrate the following thermal energy experiments:

For 14-year-olds and upwards.