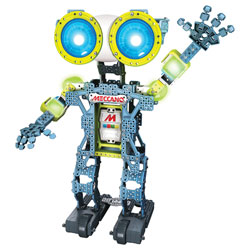 Using the 600 parts and 6 motors included, you can build a 2 foot tall real, working, moving, talking robot that is full of personality, has a sense of humour, is capable of responding to your instructions and can even mirror your movements.


Mecca Brain - Powered by its Mecca Brain, Meccanoid G15 can be programmed in 3 different ways:

Making it capable of capturing your moves and mimicking them. You can also program the Meccanoid G15 manually by hitting the Record button, moving the robot's arms and then watch the robot repeat the moves.

Voice Recognition lets the Meccanoid G15 to respond to pre-programmed voice commands like "Walk Forward". You can even program it to recognise unlimited user-recorded voice commands. It knows thousands of phrases, tells jokes, knows fun facts, asks questions, starts conversations, plays games and can even remember names and birthdays.

Program movements and sounds and play them back with a push of a button. For example, you can move its arms up and down, turn its head side to side and set it to replay those moves - the Meccanoid G15 will do the same. You can also programme it with motion capture, where it mimics your movements using the camera of a smartphone mounted on to its chest.

Dial up the fun using your smart device, (not included) and download the free Meccanoid App from Google Play or AppStore. Holding your phone or tablet, use your finger to swipe the on-screen Rag Doll avatar to make Meccanoid twist, turn or move any way you want.

Q. I will be using these in a classroom, rotating after a couple weeks to a new class. What is the best way to reset the unit for a fresh class?
A. Hi Stephanie, thank you for your question. The reset procedure is on page 41 of the manual.

Q. How can I reset Meccanoid to factory defaults as the robot will not now recognise the change of name?
A. Hi Graeme, thank you for your question. There is no need for you to go through the whole reset process. If you have gone about changing Meccanoid’s name, you can bypass autonomous mode where Meccanoid is awaiting his new name (blue eyes) by pressing the blue button on the Meccabrain. He will then switch to ‘Main Menu’ (green eyes) and from there, you can go through the original process of resetting the name to its ‘default’ – Meccanoid. To reach this stage you must say “settings” followed by “name robot”. The full list of commands can be found at the back of the instruction manual, page 56.