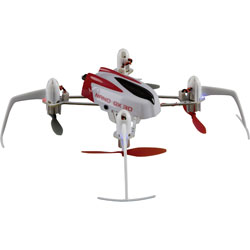 The Blade BLH7100 is a Nano QX 3D RTF Ultra Micro Quadcopter that breaks the barriers of manoeuvrability by making high-speed flips, hair-pin turns and inverted flight simple to perform. The intuitive SAFE™ technology of this quadcopter delivers a smooth flight, self-levelling and multiple flight modes. The clever design and reverse motor technology allows the Nano QX 3D to be strong and light, so there's almost no penalty for error if you practice aerobatics over plush carpet or soft grass.

The SAFE® (Sensor Assisted Flight Envelope) technology is a revolutionary electronic flight envelope protection system. This intuitive technology allows the Nano QX 3D to battle windy conditions so that performance is consistently smooth. Regardless of pilot skill level, there is a flight mode available to suit the way you want to fly instantly.

Evolve your flight routine at the press of a button with the ability to flip 180-degrees from upright to inverted and back again with ease. The flight controls stay the same, regardless of orientation. The Blade BLH7100 offers a true 3D flying experience.