We are operating to our standard same day despatch service levels; for further details please click here for our latest Covid-19 business update. 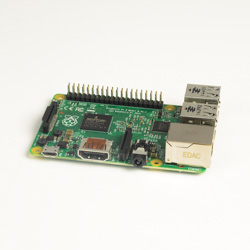 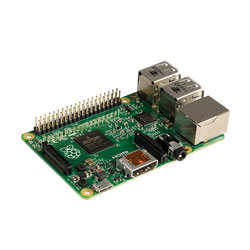 How do you halve the boot time on a Raspberry Pi? Easy, upgrade it with a quad core processor and double the RAM. The new Raspberry Pi 2 model B does just that, making it a storming 6 x faster than previous boards. Of course, it would have to be backwards compatible with previous Raspberry Pi products, and of course it is. The new board shares the same layout as the B+ and will fit all existing B+ cases. The new speed comes from the Broadcom BCM2836 ARMv7 quad core processor running at 900MHz and is application compatible with the other Pi versions. The RAM has been doubled to 1Gb of RAM allowing you to run more ambitious software.

For backwards compatibility for millions of users the heart of the Raspberry Pi is an updated Broadcom BCM2836 System-On-Chip (SoC). The SoC contains a 900MHz ARM 7 quad core CPU with hardware floating point and a Videocore 4 GPU. The GPU will playback Blu-ray quality video (1080p). The Pi 2 shares the B+ levels of connectivity, power management, audio and its famous digital camera. Complementing the launch of the new hardware there's a new version of Raspbian you'll want to download either as a zip file or a torrent.

4 x USB ports: up from the original model B's two to four on the Pi 2. Use a keyboard, mouse and Wi-Fi dongle without a separate USB hub.

Improved audio: the audio chip has its own dedicated power regulator which protects it from noise from the rest of the board. This provides a significant boost to audio quality compared to the model B.

40 x GPIO pins: the GPIO connector has same 40-pin configuration as the B+ whilst keeping the first 26 pins the same as the model A and B to allow existing extension cards to work. Please check with the manufacturer of your add-on cards to ensure model B+ compatibility.

Efficient power management: more power is available for the extra USB ports compared to the model B. Use a 2A USB power supply (such as 73-6011) to fire up all those extra devices. With a 2A supply the Pi 2 can send 1.2A to the USB ports to support power hungry devices.

The USB connectors are aligned with the edge of the board and the 4 mounting holes are identical to the B+. The SD card holder is a click-in/click-out micro SD hard holder for reliability.

New to the Raspberry Pi? More than 4 million have been sold worldwide into education, to home users and even into industry. This gives the Raspberry Pi the backing of a very active community which constantly produces tutorials, software examples and programs which are free to download over the internet. There's also a huge range of add-on hardware available from cameras to robotics and more. It is a credit-card sized computer that has USB inputs for devices such as mouse and keyboard and HDMI output for monitors or TVs. The Raspberry Pi is a capable computer that will perform many of the functions that a desktop PC will, like spreadsheets, word processing and games and will also play high definition video. Join the millions of Raspberry Pi owners today!

Reviewed by: Thomas - 03 April 2015
The Pi is a groundbreaking product. The Pi 2 just builds on that. Get one, get lots, use them for all sorts of things!