Tower Takeover is played on a 12' x 12' square field configured as seen. Two Alliances - one "red" and one "blue" - composed of two Teams each, compete in matches consisting of a fifteen second Autonomous Period, followed by a one minute and forty-five second Driver Controlled Period.

The object of the game is to attain a higher score than the opposing Alliance by stacking coloured cubes in goals. The points value of each colour is determined by the number of each colour cube placed in the towers.

There is a total of 66 cubes - 22 orange, 22 green and 22 purple. Each Alliance has 2 goal zones in which they can build stacks of cubes and there are seven towers of varying heights into which teams can place a cube. Each cube placed in a tower increases the point value of the corresponding colour stacked cubes by 1.


Experts view - Chris Calver, of VEX Robotics and Competition referee gives his opinion on the 2019/20 challenge.

Turning Point was a turbulent season. The V5 roll-out was certainly not as smooth as we would have all liked but teams did brilliantly to adapt. UK Nationals saw a mix of Cortex and V5 robots going toe-to-toe and I was lucky enough to MC some truly incredible matches, especially in eliminations. But that was last season and this is now, so lets take a look at Tower Takeover.

This game is going to take strategy to a new level because of the way that the scoring works means that the points value of each colour cube is not certain until the match ends. This means alliance "A" could think that their higher stacks of cubes are going to win the match, only to find in the dying seconds that alliance "B" managed to lower the points value of the cubes in "A's" stack and increase the value of the cubes in their own stack tipping the match in "B's" favour. It's going to make for some hectic final seconds whilst teams try to maximise their scores.

The Autonomous Line remains, and I am massively in favour of this. It means that teams will need to stay in their own half of the field during the autonomous period so everyone can focus on delivering high quality autonomous routines. Once the driver control period starts, teams can roam the whole field freely. There are no expansion limits so robots can grow as large as they like both horizontally and vertically during the match. Anyone brave enough to try a wallbot? For me, wallbots are a non-starter in this match as they can't cross the field in autonomous but teams designs always surprise me and I am sure someone will come up with something special.

Winning autonomous gives you a 6-point bonus this year rather than the 4 in Turning point and as well as the points, you'll also receive 2 extra purple cubes as match loads. These could be vital in tipping the balance in your favour. Descoring cubes from your oppositions stacks is illegal, but removing cubes from the Neutral Towers to flip the balance of scores is perfectly OK. No interfering with cubes in the oppositions Alliance Tower though!

As with last season, it's alliances of 2 and single match eliminations (often known as Best of One or BO1). Got to say I do miss the Best of Three knockouts but there is a certain air of drama that BO1 produces so bring it on!

Good luck to everyone for the season ahead.

Get the FREE VRC Hub App – All your VEX Competition rules in one place!

The VRC Hub gives you access to rules and regulations at your fingertips as well as having a utility for quickly adding up scores, a timer for practice matches and these all-important VRC match sounds. Visit the Google Play Store or iTunes Store to download now. 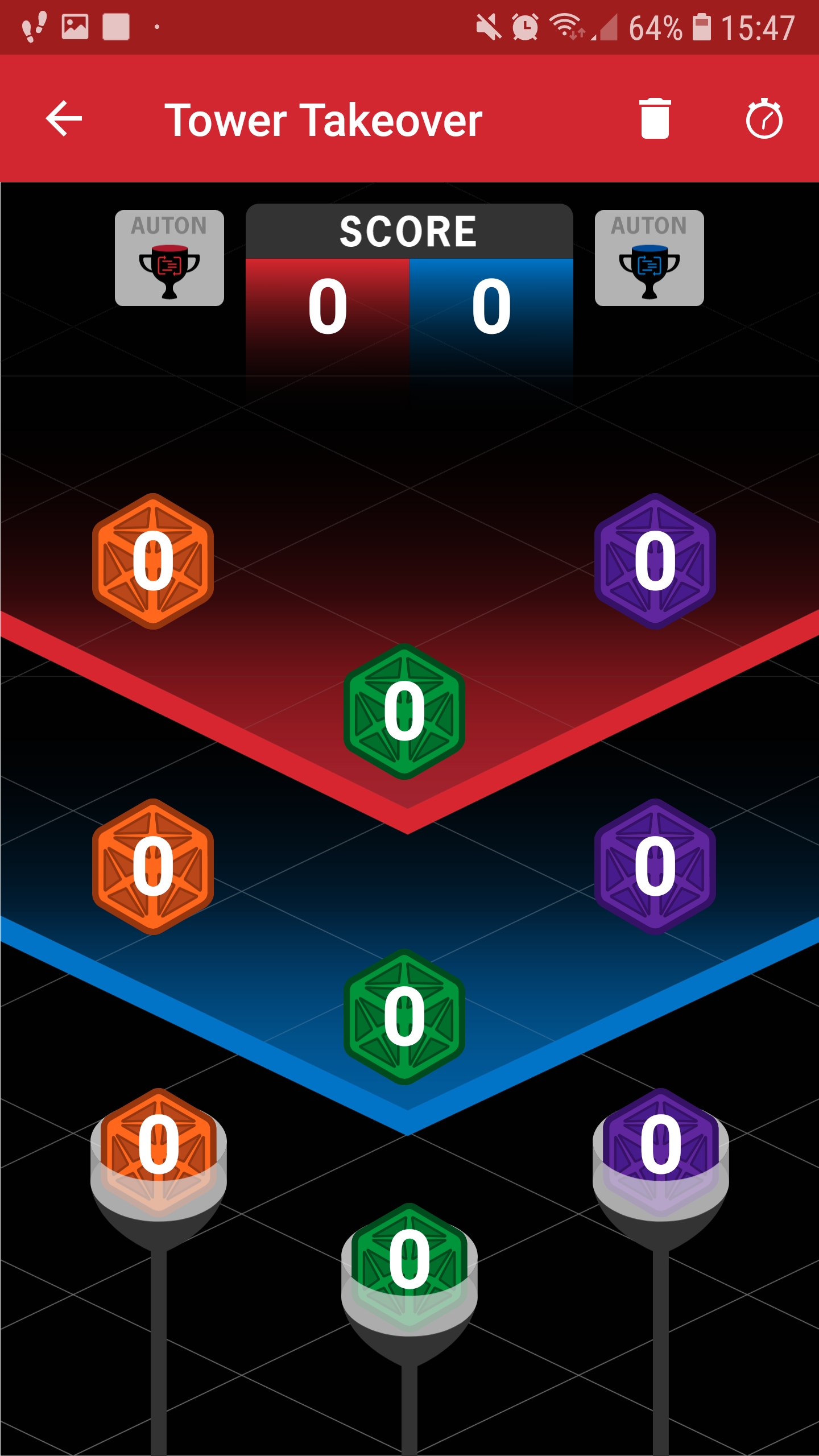 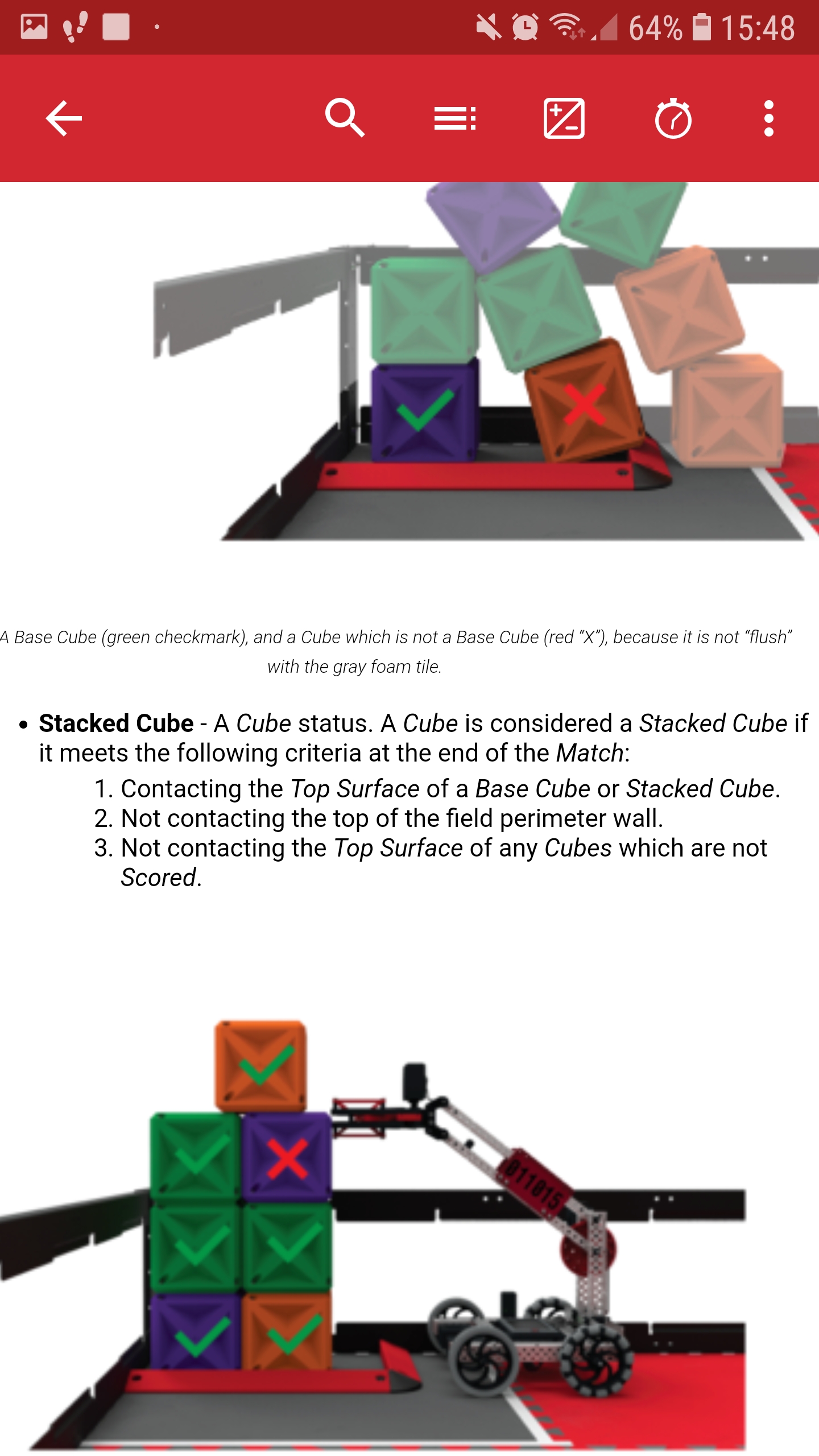