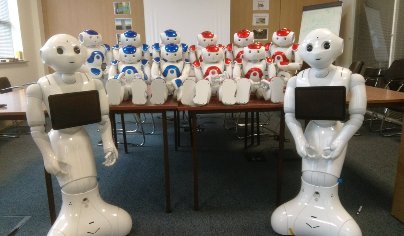 Teachers have started new jobs in classrooms up and down the country this month. But in one school there has been a very different educator getting to know its students – a robot called Pepper.

Pepper is a pioneering humanoid robot which can respond to human emotions and interact intuitively with people. Two are being employed in the brand new London Design & Engineering University Technical College (LDE UTC), which opened its doors in early September. The Peppers are also supplemented with a small army of NAO robots, Pepper’s smaller sibling. One of the LDE UTC’s procurement partners, Rapid Electronics, has supplied the new school with twelve robots in all (right), as part of its ongoing commitment to resourcing UTCs.

Ever since the first UTC was opened back in 2012 Rapid has been instrumental in supporting the new institutions.

“Our product range has made us an ideal partner for many UTCs”, says Paul Barran, Rapid’s Business Development Manager. “We supply a wide range of equipment to UTCs, including electronics, facilities equipment and office furniture, and have been able to offer specialist assistance for those with engineering and technology curriculums. Our robotics products in particular have proven very popular.” Paul and his team are regularly to be seen at open days and outreach events, demonstrating the NAO and Pepper robots and explaining the benefits they can have as an educational resource. As start-up schools go, the LDE UTC is already something of a success story. Each place could have been filled six times over. Not bad for a school that has not even been built yet – classes will be held in temporary units this academic year while construction takes place on a Docklands site next to the University of East London.The LDE UTC held a Design & Engineering festival over the summer attracting significant media interest, large visitor numbers and guest appearances from tech celebrities like The Gadget Show’s Jason Bradbury. Indeed, Bradbury has been appointed a governor and has played a key role in the planning of the school.

"It is so exciting to be opening this school", says the LDE UTC Principal Geoffrey Fowler. "It would not have been possible without the help of suppliers like Rapid, who have supported us every inch of the way. It is hard to overestimate the impact products like the NAO and Pepper have had on our recruitment, marketing and promotion. They are now as much a part of our branding as the LDE UTC logo!"

As well as LDE UTC, Rapid has recently worked with Scarborough UTC and Greater Peterborough UTC, which also opened this month. All have ordered NAO’s and/or Peppers and used them extensively in enrolment activities. “During the process of choosing equipment for the UTC we had the opportunity to try out various pieces of kit, which helped us narrow down the items which would best fit our needs”, said Tim Englefield, Principal of Scarborough UTC.

“The team from Rapid attended a number of our open days and taster days and helped us run workshops for our potential learners. At the last robotic workshop the learners were so focused on the equipment and task at hand that you could have heard a pin drop.”

It is easy to see why products like the Pepper and NAO robot have been embraced by the UTC movement. Not only are they integral to learning about programming and robotics, but they bring a midas touch to marketing activity. “Having the NAO robot at events is a real crowd puller which creates for us the opportunity to talk to potential applicants who are interested in robotics, coding and engineering”, says Englefield (pictured right, with a NAO robot).

Steve Warburton, Principal of the Greater Peterborough UTC, never thought his marketing team would include a robot. “Our NAO and Pepper robots are great as a focus for student interest, but even better as ‘projects’ for our students to engage with in lessons. They take programming away from the theory to the very practical in one comparatively easy step.”

Rapid has also supplied all three UTCs with VEX Robotics equipment, and will this year help to co-ordinate a UTC-only competition for the first time. It would be easy for Rapid to see their obligations ending at the customers’ door, but they support institutions throughout the procurement process.

Products like the NAO and Pepper are not only high value but technology rich. Rapid’s team runs training days and provides full technical support and assistance at marketing events. UTCs are having to get to grips with these rewarding but complex products at a time of intense upheaval, when staff are trying to equip schools from scratch – and in some cases while they are being built.

“We realise that a UTC is making a significant investment when they are buying a NAO, a Pepper or a VEX competition kit”, says Paul Barran. “Our job is to give them the best possible support before, during and after the purchase.”

As Steve Warburton explains: “It's great when you don’t have to explain the unique aspects of being a UTC to a supplier. Working with Rapid, I know that they understand what makes a UTC special and can tune their support to our priorities.”