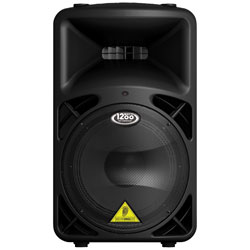 Cutting-edge technology and high fidelity transducers are not all it takes to get your musical message across... you need power, and lots of it.

At the heart of the Behringer Eurolive B812NEO is a bi-amped 1,200W engine capable of driving the speakers to their limit, without the slightest hint of distortion. When it comes to output power, the B812NEO will simply blow you away with its massive punch, smooth mids and articulate top-end!

What's more, the Behringer NEO series loudspeakers are up to 30% lighter than sound systems producing similar power, so are much easier to transport and set up.

When laid on their side, B812NEO loudspeakers tilt to the ideal angle for onstage monitor wedge applications. Hookup is simple, requiring only a single XLR cable from the monitor send on the mixing console and, of course, power. Additional monitors can be chained together via the XLR Line Out jack on the loudspeaker's rear panel.

NEO series loudspeakers also make excellent onstage monitors for keyboards, acoustic guitars, or any line-level instrument. You can plug your instrument into Mic/Line 1 and use the Mic/Line 2 input to connect the monitor signal from the PA mixing console, so you can also hear the other members of your band. If you want to use more than two instruments, you will need a submixer such as the Xenyx 1204 (available as Rapid part 35-4793) to mix the signals.