From superstar DJs to sound engineers, lead guitarists to stage managers, Behringer PA equipment is in high demand from everyone who plays, performs and records music and sound.

Uli Behringer was inspired to create the company in 1989. A piano student and electronics enthusiast who built his first synthesizer at 16, he left music college in Germany desperate to create his own studio, but discovered the cost of recording equipment disproportionate to the cost of the components. So Uli decided to make and sell his own equipment under the Behringer name, and feels vindicated. "Over the past twenty years we have received countless letters from musicians who thanked us for helping them to become a musician or recording artist because of our affordable equipment."

Whether a DJ scratching around for an amp, a sound engineer needing a new mixing desk or a guitarist feeling for effects pedals, Behringer offers audio products that combine high performance, stylish design and – most of all – affordability. Rapid can provide both ex-stock and bespoke order fulfilment of Behringer DJ gear and PA systems, with the complete range of around 300 lines available upon request.

From stock Rapid offers a select range of Behringer mixing equipment, microphones, amplifiers, Behringer speakers, loudspeakers, headphones, keyboards, stage and studio devices. Behringer effects pedals can help every bedroom guitarist turn their hand to signature sounds they have idolised and want to recreate, from the delay effects of The Edge and David Gilmour to the screaming distortion of Metallica and the wah wah of The Stone Roses. The excellent response of Behringer's microphones deliver the highest quality acoustic and electronic sounds for use in studio and stage environments, while Behringer mixing desks offer DJs supreme sonic quality and capacity across all channels.

However you like your music, from middle-aged metal to banging drum 'n' bass, Behringer PA systems provide plenty of boom to the pound. 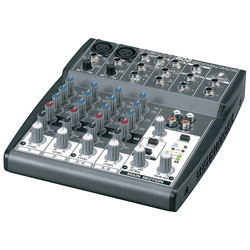