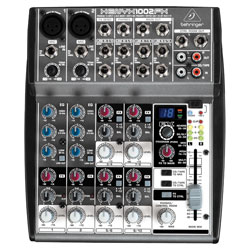 The Behringer Xenyx 1002FX lends immeasurable vibe to intimate performances with an internal 24-bit FX processor. It's light, easy to use and waiting to make your next performance three-dimensional.

The XENYX 1002FX has 10 inputs and a FX Send control for each channel. Additionally, assignable CD/tape inputs have been incorporated for routing flexibility.

Play music between sets via the RCA CD/tape inputs (assignable to main mix or control room/phones outputs) and record your performance to an outboard recording device via the RCA outputs.

Add some digital trickery to your sound using the internal FX processor. You can also connect an outboard device to apply additional effects to any channel.

Weighing in at just 2.3 pounds, the XENYX 1002FX is the portable, practical way to turn a small performance with two vocalists into a mesmerizing event. Keep it casual, or dress it up in a 24-bit digital ball gown – with the XENYX 1002FX, anything is possible.