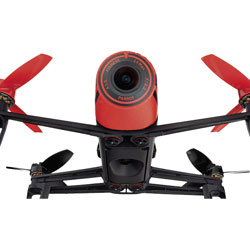 The BeBop is controlled from an Android or iOS mobile device running the FreeFlight 3 App. In addition to letting you control the quadcopter, the app provides a real-time preview from the flight camera, and you can even record a low-resolution feed directly on your device. For high res recording you can use the 8 Gbyte of built-in memory, or connect a USB storage device for increased capacity.