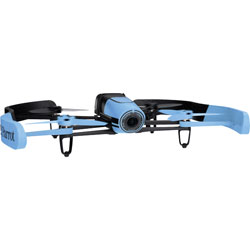 The Skycontroller extends the Bebop Drone's Wi-Fi range up to 1.2 miles and features a hardware-based control pad. To maximize the first-person flying experience, the Skycontroller allows the connection of third-party FPV glasses, including the Oculus Rift, Zeiss Cinemizer, Epson Moverio, and Sony Personal Viewer.