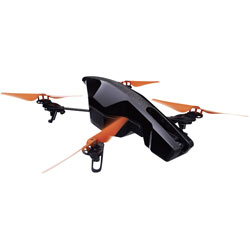 The Parrot AR Drone 2.0 Power Edition has an all-black colour scheme apart from the Propellers. It has a high battery life that can give a flight time of up to 36 minutes. This high end flying drone features an integrated HD camera and can be controlled via a smartphone or tablet, and is compatible with both iOS and Android.

The AR Drone 2.0 comes with both a streamlined outdoor hull and a bulbous, protective indoor shell with extra foam and plastic padding. Unlike past models, the Power Edition comes boxed with a range of additional rotor blades in a variety of colours. These orange, blue and red accessories not only allow for a level of customisation, but let you bring a bit of vibrancy to the black drone.

The stability of the AR Drone 2.0 is second to none and when left to hover, the Drone will hold its position with seeming ease, keeping a constant, stable space between itself and the ground. The four rotors are individually powered, with the drone's clever electronics working to keep things as level as possible.

Controlled via an app, there is a selection of touchscreen based command options available. You can also choose to use your smartphone's accelerometer to move the drone forward and back, or side to side. An emergency landing button is included on all control setups.