Printing PPE for the frontline 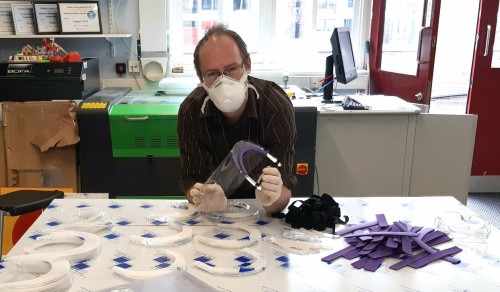 When the coronavirus outbreak forced schools to close on March 20th, it was a desperately sad day; an acknowledgement that normal life was being put on hold for an indefinite period of time.

But the doors were not closed for long. As fears grew over the shortage of PPE for health workers, several enterprising Design & Technology teachers all had a similar idea. Using a 3D printer and/or a laser cutting machine, the staple of most D&T departments, it was possible to make a simple protective visor. Could this help to plug the PPE gap across hospitals, care homes, GP surgeries, pharmacies and other healthcare settings facing the threat of Covid-19? A Facebook group was launched, design templates were shared, and by the Monday morning, March 23rd, several schools had reopened their D&T labs and commenced production. An initiative called 3D Crowd UK was also formed as an umbrella group to encourage donations to keep those working with 3D printers supplied with resources.

Within days hundreds of schools and individuals were involved, and orders were coming in. D&T depatments at the King Henry VIII school in Coventry, Merchant Taylors school in Middlesex and Ashton-on-Mersey school in Greater Manchester were among the first to mobilise, and were helped in those early days with donations of materials from industry. Designs of the face shields varied slightly, but the principal materials are sheets of acetate, acrylic, polypropylene and 3D printing filament. Rapid Electronics helped supply acetate to Andrew Duffey at Merchant Taylors school, and polypropylene and acrylic to Stuart Peet (pictured, above) at Ashton-on-Mersey school. By the end of that first week the first visors had already been delivered.

From the very beginning the schools worked closely with healthcare professionals. Both Mr Peet and Mr Duffey tweaked their designs after consulting their local NHS Trusts. Rapid has since donated further materials to several other schools, including The King's School, Canterbury, Flint High School, Stephen Perse Senior School, Cambridge, Upper Wharfedale school in Yorkshire and Simon Langton Girls' Grammar School in Kent. We have also been delighted to help Mike Ford, a retired engineer from Norfolk, who has been running five 3D printers for 14 hours a day at his home since 30 March.

Over subsequent weeks the movement has grown beyond all expectations. Over 8,000 volunteers are now involved with the 3D Crowd UK group alone, whether in schools, homes or businesses - almost wherever a 3D printer or laser cutting machine is to be found. Calling it a cottage industry would now actually underplay its reach. Orders for 600,000 face shields have been received by 3D Crowd UK, with over 92,000 delivered. After including gloves, scrubs, masks and other PPE, over 200,000 pieces have now been produced. A flooring manufacturer in the Midlands is working with Merchant Taylors school to upscale production. Last week Ashton-on-Mersey school passed the 10,000 shield mark and is currently producing over 3,000 per week. Demand, unfortunately, is expected for months to come, and even when the UK moves well beyond the peak of the pandemic other countries will still be in desperate need of the same equipment.

This week the incredible @Rapid_Edu supported us with an incredible donation of materials. We've now helped over 100 wards, gps and carers. Today alone we're made 1071 visors... @DT_AoMSchool pic.twitter.com/z70EDPu02j

"We are in awe of the work that has taken place across our community over the last month", said Tony Ryan, CEO of the D&T Association. "Our subject is all about designing solutions for human problems, and what bigger challenge has society faced in recent years? We have seen innovation and a sense of the difference that a community working to a common purpose can make. I think I speak for all Design and Technology teachers in stating that we are all pleased to be making a small difference in the best way we know how.” 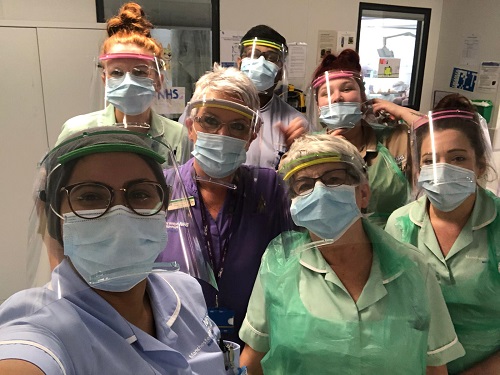 Jennifer King, Education Product Manager at Rapid, said that the company was only too happy to help out. "If we have the materials available, and we are working hard with our suppliers to ensure that stock continues to come in, it is the least we feel we can do. We will continue to prioritise any such requests. We want to help anyone working on projects in the fight against Covid-19, or to protect those caring for patients with the virus." Staff at Rapid have themselves been using their 3D printer to help with the effort.

But the community needs funds in order to maintain and if necessary expand its production. Andrew Boucher, who helped found 3D Crowd UK, said last week: "Many 3D printer owners have donated their own filament in the race to produce face shields but now urgently need more supplies to keep their printers running. To meet our massive orders, we need to commission large scale manufacturers, many of whom have come forward to help but need to recoup their costs. Given a bigger budget, we could have hundreds of thousands of units a week, using a mix of mass manufacturing and 3D printing.“

Donations can be made at the 3D Crowd UK GoFundMe page: www.gofundme.com/f/3dcrowd-emergency-3d-printed-face-shields.