Pepper in the groove at UTC Leeds 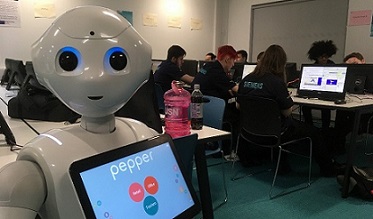 Pepper the robot was in the groove recently at an event for students to demonstrate their programming skills.

As part of UTC Leeds' Robot Week, students took part in a “Robot come dancing” competition organised by Rapid, where they used their coding skills to program Pepper to perform several different dances. In the morning each team worked with Pepper's Choregraphe software animation mode, before showcasing their efforts in the afternoon. Students quickly picked up the capabilities and soon had Pepper twisting, posing and rapping with the eventual winners joining in to do the Macarena!

The exercise showed students the link between actual programming and real life humanoid robotics, and some of the complexities involved in the process.

James Haley, Rapid Education's Business Development Manager for the North of England, said: "We supplied the robot and software on the day to allow several groups to come up with their own dances, and it is a credit to all of them that they quickly understood what was needed and programmed different routines. Pepper is a great educational platform as it allows students to interact and perform some quite sophisticated actions, as the winners dancing the Macarena demonstrated."