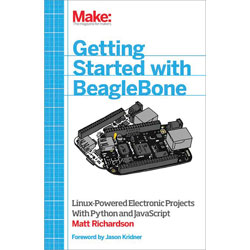 Many people think of Linux as a computer operating system, running on users' desktops and powering servers. But Linux can also be found inside many consumer electronics devices. Whether they're the brains of a cell phone, cable box, or exercise bike, embedded Linux systems blur the distinction between computer and device.

Many makers love microcontroller platforms such as Arduino, but as the complexity increases in their projects, they need more power for applications, such as computer vision. The BeagleBone is an embedded Linux board for makers. It's got built-in networking, many inputs and outputs, and a fast processor to handle demanding tasks. This book introduces you to both the original BeagleBone and the new BeagleBone Black and gets you started with projects that take advantage of the board's processing power and its ability to interface with the outside world.